Florida State University was an early adopter of Healthy Campus 2010/2020 over 12 years ago. At that time, the committee determined that alcohol issues and high risk drinking prevention was a priority and should be the main focus of the committee's efforts. In addition, the University was awarded a Partnership for Alcohol grant of $700,000 to address high risk drinking from an environmental management approach. In 2009 the committee determined the significance in a broader health focus and developed four subcommittees to better address additional areas of health. The committees consisted of Alcohol; Nutrition; Tobacco & Other Drugs and Life Balance. Each committee developed objectives and priorities with corresponding initiatives for each topic area. Three years later, a re-organization of Healthy Campus further developed into 6 Strategic Health Teams that include: Alcohol & Other Drugs, Eating Disorders, Mental Health, Nutrition & Fitness, Sexual Health/Sexual Violence and Tobacco. In 2014, a further organization occurred by dividing the sexual health/sexual violence into two committees and merging the Nutrition, Fitness, and Eating Disorders team into a Physical Health team which also incorporates other physical issues such as sleep and cold/flu.

In 2017, we shifted our focus from only five components of health to a broader perspective  that incorporated the eight dimensions of wellness.  We believe that our healthy campus initiatives and programmatic efforts should ensure students understand how interconnected each of the dimensions of wellness are in promoting academic success and lead to optimal health and well-being. 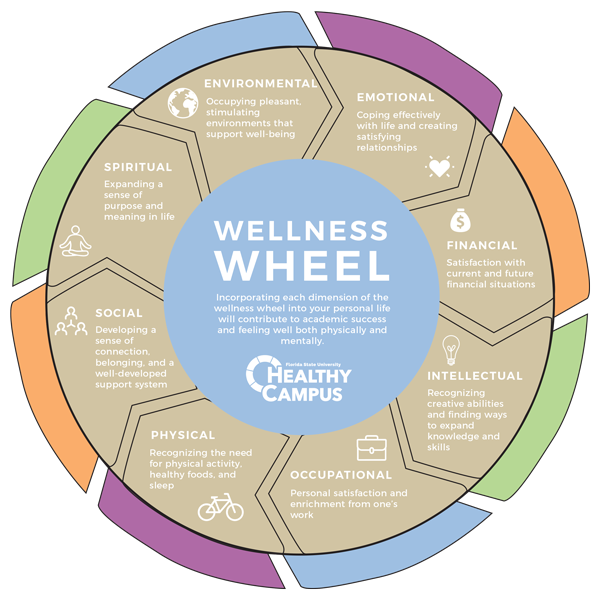 Note: For urgent medical issues or questions, please call 850–644–6230 . Any information sent through the provided links is not secure and it may take up to 48 hours to recieve a response.